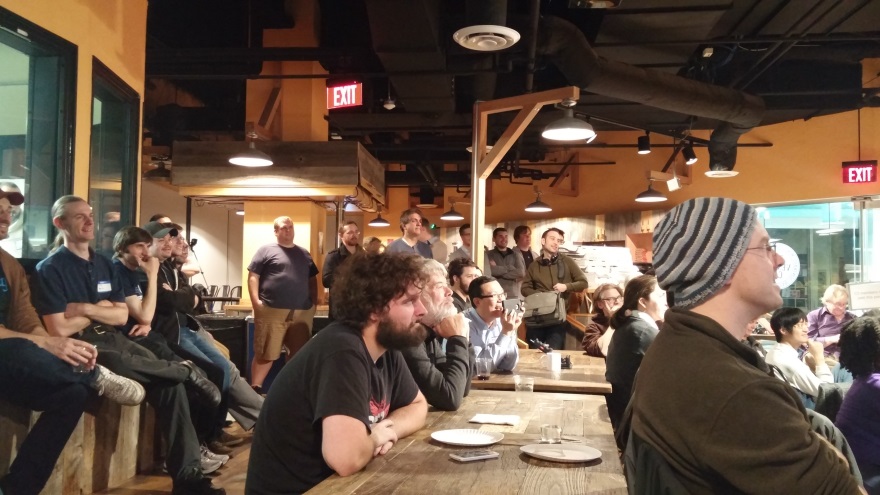 For the Virtual Reality industry, the foundation is rapidly coalescing. The first tools are being built and going to market, startups are forming, leadership is being established, and the first sources of guidance are emerging. For instance, The Road to VR is an indispensable aggregation of news, and if you’re looking for a first-person perspective from within a company that just snagged more funding than Oculus, I recommend NextVR’s Helen Situ.

But how can you take that next step, and really immerse yourself in immersive tech? How can you interact, face-to-face, with the people shaping the industry and actually demo their products? Those of us in the Boston/Cambridge area are fortunate to have the monthly Boston Virtual Reality Meetup to provide such opportunities.

At EMC (where I work), training guidance is provided in the form of Learning Paths, organizing our industry-leading training (shameless plug) into areas of concentration such as Virtualized Infrastructure and Information Storage and Management. At November’s Meetup, attendees were treated to an equivalent virtual learning path of tech, companies, and equipment, with demos that covered the immersion spectrum, ranging from virtual enablement tools such as 360-degree videos and wearable joystick controls, to fully immersive virtual environments and entire product ecosystems.

Speaking of learning paths, it’s one thing to think a technological learning curve like virtual product development is too steep to scale, and entirely another to meet a 9 year-old who has scaled it. Trust me: nothing will inspire you to stop procrastinating – about anything – more than meeting a 4th-grader who just coded a functioning, interactive 2D game.

Seriously: the first people I encountered were Theo, Tate, Sebastian, and BJ, ages 9-13, from the West Tisbury School on Martha’s Vineyard, Massachusetts. They created “School House Chop,” an interactive game that responds to users’ movements. This experience required no headgear of any kind and instead, was facilitated by hand motions read by a kinetic scanner (just like Wii Fitness). According to Derek, father of Theo and Tate, the team learned to do so through one full day, three half days, and several one-on-one sessions of UNITY training with faculty and parents. Keep an eye out for this team’s progress as they aim to develop the fully-immersive version (and if you’ve been putting off learning UNITY, this is your Wake Up call). The next step down the learning path led us to the world of 360-degree video, courtesy ofStreamVR. Their motto is, simply, “Be There,” and I was, viewing 3D content captured through seven 4K Go Pro Hero cameras and streamed via Samsung’s Gear VR headset (left). The headgear was comfortable and the content caused no motion sickness (unlike Oculus Rift), but the resolution could be higher and the stimulation gap between passively experiencing 3D video and actually interacting with one’s environment felt significant. To date, there have been examples of successfully executed 3D video experiences(others, less so), and companies like StreamVR will play a role in mapping out realistic, virtual environments. It will be interesting to watch the improvement of video resolution and how companies like StreamVR partner with headset manufacturers, organizations, and events going forward. Nod Labs, a gesture recognition and motion tracking company, provided my night’s first foray into a semi-immersive environment through their demo of a “highly-responsive wireless controller designed and fully-featured for immersive play across platform, in both desktop and mobile VR.” Of the two versions of the Backspin Innovator Edition joysticks they promote – one a larger, hand-held joystick, the other a Bluetooth-enabled ring – the latter was available for demo purposes. While a little difficult to manipulate at first (all the controls – for both navigation and action – were housed on a console you wore like a ring), it was relatively easy to acclimate and the experience was not undermined by design. By the end of my demo the greatest problem was not navigation or control but that the game was a self-defense scenario set in a darkened nursery, during which I warded off giant stuffed bunnies with an assault rifle. Yes, you read that correctly.

In Part 2 of the November recap, we’ll cross the immersion threshold and pilot spacecraft in a new game from a team of developers out of Becker College, conjure realms with Archean Worldbuilder, and get a look at the product offerings of the Guangzhou, China-based startup, XiMMERSE. Stay tuned!